About the owner and your trainer
What is Loyal K-9?

Loyal K-9 is a service dog training and private boarding facility. Loyal K-9 training facility, is unique and located in Moreno Valley Ca. David works out of his home and only takes on a limited amount of dogs to train each month to make sure his dogs he is training and their owners are giving the 110% attention that they need. Loyal K-9 specializes in teaching basic obedience, starting with puppy lesson all the way through off leash training and advanced training (K-9 training). We work with all dogs and breeds to modify their behavior to the owner’s custom need. Some things that David needs to fix include but not limited to jumping up on people, hyper energy, separation anxiety, digging, chewing, destroying property, house training, aggression and a wide variety of other unwanted behaviors.

Loyal K-9 has a wide variety of training techniques and methods. Loyal K-9 always will give you many tools for your tool box and not just “My way or the highway”! He can train dogs and owners in tracking, scent work and area searches with dogs that have the ability to excel in this type of work. We offer a full boarding training service where the dog is boarded here and trained. We then will train you on everything we trained your dog with follow up in home lesson(s) or maybe you prefer training in the privacy of your home with a private trainer. You are the customer; how can we help your needs?

Dogs are recognized as having advanced scenting abilities and are taught for just that. Training however, is limited only to dogs that pass the scent test and search drive. Loyal K-9 can train for narcotics, bed bugs, article searches and tracking.

What is our type of training?

David wants to teach you how to build a relationship with your dog; a relationship where your dog is focused completely on you regardless of what is going on around you. When you build this type of relationship you are building the dogs trust in you and it is done interacting with your dog through games. Yes, basic obedience is considered a game if applied properly. You want to build a quick response with your dog and keep him glued to you guessing what is going to come next. We teach you how to make training fun for both you and your dog. We use a simple negative and positive reinforcement reward system and train with love and respect. We use a random reward system and not just treats. This builds a happier, healthier relationship and makes your time training fun for both you and the dog while he is learning what you want. We teach you to take the guess work out of training so the dog has a clear understanding of what you want. The dog becomes much more confident and happier working because he learns how to choose the right behavior to get the reward so there is no more guess work involved.

David Pellerin has traveled the world and began training and handling dog in the military since 1993. He has been in several war campaigns both active duty as a Narcotics/Explosives dog handler (MWD NDD/EDD) in Kuwait and Saudi Arabia and as a civilian explosive detection dog handler (CWD/EDD) in Iraq and Afghanistan. He always has a story to tell. David took advantage of being overseas and began to learn better ways and methods to train both military dogs and civilian dogs in a more updated training method that he was able to bring back to the US and begin implementing it into the normal everyday household dog and family setting. His training came from other handlers, trainers and kennel masters from the US, Slovakia, Germany, UK, South Africa, Australia, Philippines, Ireland and other countries. He is always open to new and better training methods. After the military service, David bounced around from local dog training companies and saw how they were still using old style methods of training. David tried to show these companies new, better and advanced training methods that could make the dog’s life a lot more fun to learn. It was falling on deaf ears and was even told from one training company owner “If it isn’t broken then why fix it?” David had enough and said “It is broken and I am going to do fix it myself.” David has been doing it himself as a competitor since 2010 and now has some competitors wanting to team up with him now and is at times been hired as a consultant and dog training advisor at the competitors seminars.

David was also responsible for training over 27 Police/Sheriff and special unit K-9 Departments from Southern California to Northern California to Arizona and Mexico boarders earning him the title Master Trainer. David specializes in obedience, article searches, tracking, narcotics, building and area searches, bed bug detection, handler protection, home protection and much more. He is a firm believer that obedience is the key to training the complete dog. David is famously known for saying “A dog is just a dog living in a dog’s world, your dog now needs to learn how to be a dog in a human world.”  David even once took a challenge from a competitor claiming that her dogs are the only dogs that can be trained for bed bugs and her methods are the only way to be taught. In 3 weeks, David sent her a video of his own 5 year old, 100lb German Shepherd of "Maverick" finding bed bugs located in various places and furniture and alerting by sitting and staring rather then scratching and causing damage to the customers furniture. She was unavailable for comment.

Loyal K-9 motto is simple as his training, “Helping people to have a better relationship with their Loyal Canine.”

David is now considered the #1 dog trainer with the highest reviews for the Inland Empire and moving his way West with more and more clients that are referring him. Don't be surprised if you have to be on a two-three month waiting list. David has clients from the Pacific Ocean to the Arizona boarder and has never bragged, rode coat tails or advertised to gain publicity by advertising “Famous” clients from TV shows, musicians, professional athletes, game designers etc. Because he knows they are just people that are also in need of help with their dogs and they come to him for his Non-Disclosure Agreement(NDA), respect to professional privacy, patience, and customer service when he is in their home training.

Who is David when having fun training

David is also known for not only making dog training fun but also likes to joke around IE: Backing a K-9 police car up to the porta-potty so the officer could not get out or bringing out the wrong dog for his training demonstrations convincing clients that their dog in 3 weeks has gone from a puppy German Shepherd to a full grown German Shepherd or a Chiwawa to a Great Dane. David is also known for his homemade corky/comedy videos involving client’s dogs as actors to give to the dog’s owners for that extra special personal touch and is also known for his homemade before and after training videos of the dogs that have the good, the bad and the ugly in them. He loves helping people and also has a compassionate side and has been known to sleep in a dog kennels with separation anxiety just so the owners dog is comfortable overnight and is not felt left alone or abandoned. David treats his clients dogs as if they are his own and this is probably why he is rising to the top of his field in a rapid fashion. 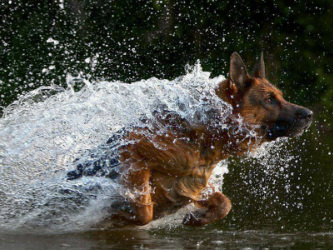